You are here: Home / ECONOMY / With Buhari away, Vice-President Yemi Osinbajo comes out of the shadows

by admin
Filed under: 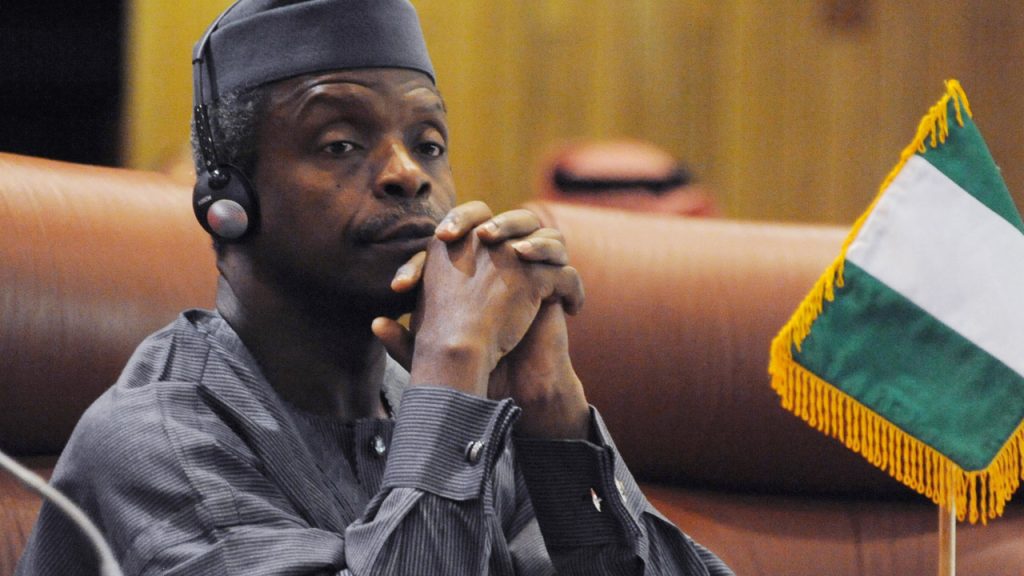 The clear aim, it seems, is to give the impression of business as usual while President Muhammadu Buhari is nearly 5,000 kilometres (3,000 miles) away in London on medical leave.

The government appears keen to avoid the impression of a political vacuum, as happened in 2010 when president Umaru Yar’Adua fell ill and later died while being teated abroad.

Since Buhari, 74, left for the British capital on January 19, 59-year-old Osinbajo has rarely been out of the newspapers or off the television news. His consensual style — and short stature — have stood in marked contrast to the rangy Buhari, an uncompromising former army general who headed a military government in the 1980s.
The vice-president has toured the oil-rich Niger delta — something Buhari has yet to do — and held talks to end militant attacks that have wreaked havoc on the oil and gas infrastructure.

He has met ambassadors and delegations, and chaired cabinet meetings in Abuja with an ease, professionalism — and visibility. Even the unannounced visit to Murtala Muhammed International Airport on Thursday was a media event. But in it, he stressed an important point, given the parlous state of Nigeria’s economy.

There was a “need to ensure that facilities are working and that things are being run properly”, he said in a statement, which noted the need to fix lifts and faulty baggage carousels.

First impressions counted if Nigeria was to attract foreign firms, added Osinbajo, a trained lawyer and former university professor, who is also a pentecostal church pastor.

Buhari and his government have seen Nigeria’s economy nose-dive since they came to power in May 2015, on the back of a slump in global oil prices. The country has been in recession since August.

But there are indications the weakened naira currency could be showing small signs of recovery after the central bank this week moved to ease some foreign exchange restrictions.

In the last few days, the naira has strengthened to about 480 to the US dollar on the black market after being 520 or higher in recent weeks.

Fitch’s BMI Research said the policy could be “a precursor to a more meaningful move in the exchange rate” given the yawning gulf between parallel rates and the official inter-bank rate of 305.

That could pave the way for a further devaluation — which Buhari has likened to murder — to encourage wary investors bring their money back to Nigeria.

Some analysts have seen it as significant that the measure was introduced while Buhari was away. Osinbajo has also reportedly vetoed four parliamentary bills.

Buhari has long been known for deferring economic matters to the London School of Economics graduate. But how far the latter’s powers stretch in taking individual decisions is unclear.

Political analyst Chris Ngwodo said despite Osinbajo’s high visibility — and apparent competence — he was limited as acting president because of Nigerian political realities.

“In Nigeria, powers are vested in persons rather than in the office they occupy. The acting president is in office, not in power,” he told AFP.

“He may have been taking some decisions which I see as mere palliatives: for instance, the adjustment in the foreign exchange policy which flows from a broader consensus of the people.”

He would not be able to take unilateral decisions and was restricted in his reach as “he is not the executive president Nigerians voted for”, added Ngwodo.

Osinbajo, a former justice commissioner in Lagos state, comes from the southwestern state of Ogun and was appointed to be vice-president as a counter-balance to Buhari, a northern Muslim.

Identity politics play an important role in Nigeria, as does the expectation that the presidency alternates between north and south — even if it is not enshrined in the constitution.
As such, Yinka Odumakin, spokesman for Afenifere, representing the ethnic Yoruba people of the southwest, said Buhari’s inner circle would always try to keep him in check.

“We are not going to see much from Osinbajo apart from symbolic movements and gestures here and there because his powers are limited,” he added.

“He will be acting under the shadow of his principal or a cabal loyal to him.”

Why your company should have a newsletter   Introduction Every day, companies are always on … END_OF_DOCUMENT_TOKEN_TO_BE_REPLACED

UNILORIN Postgraduate Programs, Courses and Admission Requirements The University of Ilorin is one … END_OF_DOCUMENT_TOKEN_TO_BE_REPLACED

FUTO ADMISSION REQUIREMENTS , COURSES AND PROGRAMS Are you a prospective candidate with dreams and … END_OF_DOCUMENT_TOKEN_TO_BE_REPLACED