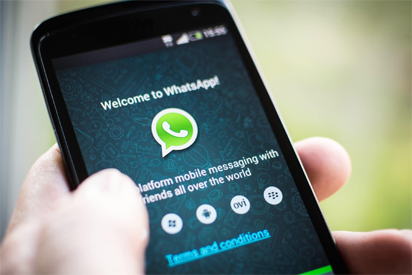 WhatsApp has announced the launch of a new feature globally that will highlight when a message has been forwarded and not composed by the sender.
“This extra context will help make one-on-one and group chats easier to follow,” WhatsApp said in a blog. “It also helps you determine if your friend or relative wrote the message they sent or if it originally came from someone else. “To see this new forwarded label, you need to have the latest supported version of WhatsApp on your phone,” WhatsApp added.
The messaging application made the move public on Tuesday through its official blog following calls from various parts of the world, including India, to tackle the spread of fake news. In the statement, the platform, owned by Facebook, said, “Starting today, WhatsApp will indicate which messages you receive, have been forwarded to you.
Recently, while replying a notice by the Indian government to take immediate measures to prevent misuse of its platform, WhatsApp had said that it was testing a new label that highlights when a message has been forwarded. “This could serve as an important signal for recipients to think twice before forwarding messages.
“Because it lets a user know if content they received was written by the person they know or a potential rumour from someone else,” it had said. In its blog, the instant messaging application added, “WhatsApp cares deeply about your safety.
“We encourage you to think before sharing messages that were forwarded. As a reminder, you can report spam or block a contact in one tap and can always reach out to WhatsApp directly for help.” The company had last month also announced “unrestricted monetary awards” for research on spread of misinformation on its platform to address the problem.

Want to Start a Blog and Purchase a Web Hosting, Domain Name Registration? Here’s How Since you’re … END_OF_DOCUMENT_TOKEN_TO_BE_REPLACED

Why your company should have a newsletter   Introduction Every day, companies are always on … END_OF_DOCUMENT_TOKEN_TO_BE_REPLACED

UNILORIN Postgraduate Programs, Courses and Admission Requirements The University of Ilorin is one … END_OF_DOCUMENT_TOKEN_TO_BE_REPLACED

FUTO ADMISSION REQUIREMENTS , COURSES AND PROGRAMS Are you a prospective candidate with dreams and … END_OF_DOCUMENT_TOKEN_TO_BE_REPLACED