You are here: Home / INSURANCE / ‘Order from above’ authorised DSS’ invasion of National Assembly 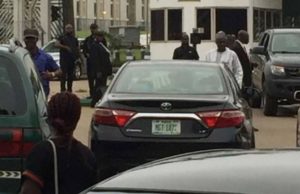 Following the drama ongoing at the two chambers of the National Assembly where men of the Department of State Security Services, DSS, Monday morning, denied some Senators and House of Assembly members access into their chambers, reports have claimed the DSS men have however granted access to some All Progressives Congress, APC, lawmakers.
Over 22 APC Senators were initially granted access into the chambers while many others, under the Peoples Democratic Party, PDP, were denied access.
The clerk to the National Assembly has equally been denied access to the chambers by the DSS operatives. Nevertheless, one of the DSS operatives, when asked on whose orders they had invaded the NASS said it was “order from Above.”
Both Journalists and National Assembly staff were also barred from entering the complexes. The camera and phone of a journalist covering NASS were seized by the DSS who were very hostile to the newsmen.
This is following the emergency meeting summoned by the Senate President, Dr. Bukola Saraki yesterday to discuss Issues which included the string of defections in the political space, rumoured plan to impeach the Senate President and the pending 2019 elections supplementary budget, among others.
Recall however, that the presidency had raised the alarm yesterday over the scheduled emergency Senate meeting today which was to have in attendance, the House of Representatives’ Speaker, Hon. Yakubu Dogara as well as other lawmakers.
The presidency had claimed that the meeting was being aimed at shutting down the entire government of President Muhammadu Buhari.
However, senators loyal to Saraki have forced their ways into their chambers from the back doors and have refused to be intimidated.
Meanwhile, Senator Ben Murray Bruce and many other lawmakers have condemned the alleged invasion, saying it was a coup on democracy. A PDP House of Representatives member from Rivers State, Boma Goodhead, led some of the Senators to challenge the DSS operatives. She had challenged the DSS operatives to dare shoot at them, saying the previous administration of GoodLuck Jonathan did not launch attacks on the nation’s democracy through the use of force on the national assembly.
Currently, senators loyal to Saraki have regained access into the chamber and have been taking photo shoots in jubilation. Some of the Senators condemned the invasion. Senator Murray-Bruce accused the presidency, Senator Godswill Akpabio (who has, this morning, dropped his Minority Leadership position in the Senate) and other senators of the APC of orchestrating the invasion.
Senator Dino Melaye said, “Democracy under attack. Nigerians must defend democracy. We will not allow antidemocratic forces to prevail. CNA Administrative head of the National Assembly stopped from entering the NASS. Impunity taken too far.”
Sen. Rafiu Ibrahim said, “The assault on our democracy is on-going while the @NGRPresident @MBuhari is on holiday only to “remote control” a coup from abroad. One wonders how the pretense (every time state forces are used illegally to undermine Nigeria’s democracy) has become an open secret of tyranny. I was just barred by fully armed, masked officers of the DSS from entering the National Assembly (@nassnigeria). “We’re acting on the order from above,” I was told by officers laying siege on the Assembly. All entrances BLOCKED. Democracy is on siege! @UN”
Senator Isa Misau, representing Bouchi, Central, on the other hand also spoke on the inversion. According to Bruce,”It has come to our attention that we’re being invaded by state security. Our colleagues can’t go to work after we adjourned for summer holiday. We’ve been informed that the APC senator are trying to effect a leadership change.
“This is anti democracy. We’re going to ask western democracy. We’ll ask the western countries to revoke the visas of Sen Akpabio. We’ll ask them to revoke the class of their wives. Let nobody test me or this institution. “We’ll submit the names of DSS officials and that of Akpabio to the western embassies. I hope this anti democracy forces love Nigeria, so they won’t travel out of the country for a very long time.
Akpabio will have to sell his aircraft and thereafter I’ll have to buy him a donkey so that he can use it.”

How to Run a Micro, Small, and Medium Enterprises (MSMEs) in Nigeria Successfully Sometimes in most … END_OF_DOCUMENT_TOKEN_TO_BE_REPLACED

FUNCTIONS OF THE EXECUTIVE ARM OF GOVERNMENT When it comes to the concept of separation of power, … END_OF_DOCUMENT_TOKEN_TO_BE_REPLACED