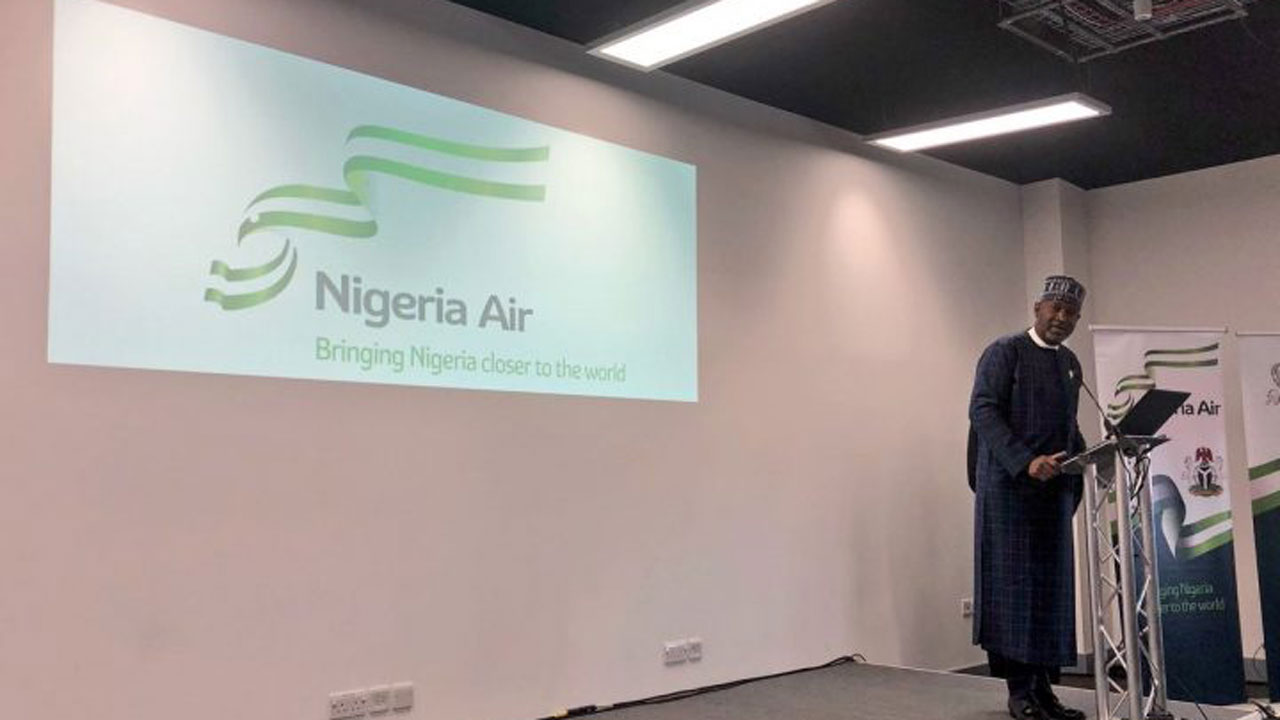 The Federal Government has unveiled the name of the new national carrier as Nigeria Air. The airline, set for take-off on December 24, is largely private investors-owned, with the government owning only five per cent equity.

Minister of State for Aviation, Hadi Sirika, at the unveiling of the name and logo at the ongoing Farnborough Airshow in London yesterday, said the airline would restore the country’s place in global aviation, covering no fewer than 81 local, regional and international routes.

Sirika, in the presence of prospective investors, airline manufacturers and strategic partners, said the national carrier would be strategic to growth of aviation sector, even as the Federal Government has decided not to interfere in the day-to-day running of the airline.

A statement signed by the Deputy Director, Press, Ministry of Aviation, James Odaudu, quoted the minister as saying: “We use to be a dominant carrier in the continent of Africa through Nigeria Airways. Sadly, Nigeria Airways is no more.

“Government has been quite liberal by liberalising the sector at the tail end of 70s and early 80s to allow private sector participate in creating a robust airlines that would serve the market, and that would transform the economy of that region.

“Unfortunately, the stories of the initiatives, which were well-recognised and respected, had not yielded the desired goals of achieving a top class, competitive, efficient and vibrant carriers. With the government of Nigeria, it is extremely important that the service is provided. The reason being, there is a service that is needed and also, it will offer employment opportunities that will kick-start and ginger and double up and rush the growth of the economy of Nigeria.

“So, we take it as an extremely very important venture. And that is why government thought it has the responsibility upon itself much more than a social in trying to create a new national carrier that will be typical and private sector-led and driven through Public Private Partnership (PPP) arrangement.

“This airline is a business and not a social service. It is not intended to kill any airline in Nigeria but complement it and promote it. It must be done in a right way so that it is here to stay. Government will not hold shares beyond five per cent at the top most.”

Sirika, who stated that government would come up with funding according to the business case that had been delivered to government, further said: “We will engage the youths of Nigeria because we do believe in the ‘Not Too Young to Run’. We engage them in the campaign to name this airline. We engage 400,000 Nigerian youths to arrive at the name of the airline. All of their ideas were taken and digested and we came up with what is an average.

“The airline will take into cognisance the multicultural nature of nation through its diversity. We want to use this airline to make a statement that ‘Yes can we do it’. We want to use it to promote our culture and tradition.”

“There would not be a single government control of this airline. Not in management, not in human management. People who invest would determine that. We have a policy where employment goes to Nigerians first before it goes outside.“We will fast-track our International Air Transport Association (IATA) membership and go through IATA Operational Safety Audit (IOSA) audit soon. We are not afraid to go through this because we have demonstrated that Nigeria is a responsible state.”